Pipe X60 is a high-grade steel pipe that meets the API 5L standard. The API 5L X60 Pipe comprises a chemical composition that includes carbon, manganese, sulfur, silicon, chromium, potassium, and phosphorus, amongst other elements. These pipes have great corrosion resistance and can withstand very high temperatures. The API 5L Grade X60 High Yield Pipe has been built with improved mechanical qualities to provide greater strength and durability. They have a tensile strength ranging from 415Mpa to 615Mpa and a yield strength ranging from 245Mpa to 450Mpa. API 5L X60 Seamless Pipe is manufactured from a single piece of steel called a billet. Pipes made of this material are highly robust and extremely dependable in a wide range of applications and pressure systems. X60 ERW Pipe is a low-cost pipe type that is available. These pipes are incredibly dependable and do not allow any leaks to occur. They are very long-lasting and can be cleaned and maintained with relative ease. API 5L X60 PSL1 Welded Pipe has a maximum carbon content of 22 percent and is available in various sizes. These pipes are available in various forms, including square, round, spiral, rectangular, etc. It is possible to utilize the X60 Steel Nace Pipe in various corrosive situations. These pipes exhibit good resistance to pitting and crevice corrosion, common in this environment. The X60 Pipe is extensively utilized in various sectors, including sugar manufacturing, power generation (both nuclear and thermal), oil refineries, pressure systems, and general engineering applications. API 5L X60 Pipe is our specialty, and we are the top supplier in Mumbai. We strive to provide the highest quality items possible at the most competitive prices.

The carbon content of the X60 Carbon Steel Pipe is quite high, making it a very strong steel pipe. These pipes may be cold-rolled to provide a smoother finish following the hot-rolling procedure. They are available in a range of sizes ranging from 1/2NB to 48NB. API 5L X 60 Carbon Steel Seamless Pipe is one of the most durable pipes available in this carbon steel grade. In addition to being constructed with outstanding dimensional precision, it is available in schedules ranging from 10 to 60 and XXS. The API X60 Carbon Steel Line Pipe is utilized to transport liquids such as water, oil, and natural gas. These pipes are available in various finishes, including paint, FPE, annealed and galvanized. This provides them with improved protection against corrosion and abrasion, among other things. A high-precision pipe, Grade L415 X60 Spiral Welded Pipe, is best suited for small quantities because of its high accuracy. These pipes are sturdy and can be bent into various shapes and sizes with relative ease. The Grade X60 PSL2 Spiral Pipe is available in various diameters, including single random, double random, and bespoke sizes up to a maximum length of 12 meters. These pipes] are available in all schedules and have various tube ends, including plain, threaded, screwed, and beveled. The Grade X60 PSL1 Pipe Line is a low-pressure and high-temperature system pipe commonly utilized. These pipes have minimal mechanical characteristics and are commonly utilized in-home water supply systems because of their inexpensive cost. The pipeline of X60 Grade PSL2 is used to transport caustic and combustible products from one location to another under harsh situations, such as earthquakes. The tremendous strength and resistance of these creatures are unmatched. The API 5L X60 PSL2 material offers improved stress and corrosion resistance than the standard API 5L X60 material. They are stronger than ordinary PSL 1-grade pipes because they have a greater carbon content than standard PSL 1. When manufacturing items for the X60 Grade PSL1 Line Pipe and our other products, we use the highest-quality raw materials and the most up-to-date technology.

The API 5L X60 SCH 40 DSAW Pipe is a low-cost, high-efficiency pipe with long service life. They have an exterior diameter that ranges from 16OD to 54OD, depending on the species. These pipes are offered in two different welding configurations: straight and spiral. If you're delivering corrosive hydrocarbons over long distances, API 5L X60 Grade B LSAW Pipe is the ideal solution for the job. These pipes are available in various wall thicknesses ranging from 8mm to 50mm. The rate of flow in the API 5L Grade X60 PSL2 Epoxy Coated Pipe has been enhanced by 20% compared to the previous model. This coating in these pipes makes them leakproof, and it also enables the repair of these pipes to be completed much more quickly. It is possible to utilize the API 5L Grade X60 PSL1 Sour Service Pipe in various hydrogen-induced situations since it is a dependable pipe. Cost-effective and very efficient in their overall operation, these pipes are an excellent choice. API 5L Gr X60 HIC Pipeline is available in various chemical make-ups and diameters and may be modified to meet your specific needs. If you have any questions or would want to learn more about API 5L Grade X60 Pipe, please do not hesitate to contact us for further information. 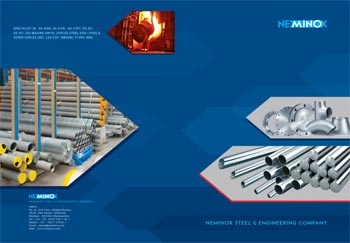 Neminox Steel & Engineering Co. offers the wide range of Industrial metal and steel products like pipes, tubes, sheets, plates, rods, bars, weld, flanges, forges & pipe fittings in various materials. Since two decades, we have led as a reliable exporter, supplier, trader and stockist of industrial steels in the world-wide market. We can also provide custom required as per your cut & full length, sizes, hardness and grades at the most competitive prices. Neminox Steel & Engineering Co. is ISO 9001:2015 approved manufacturer in India. We export the standard quality with swift delivery services to countries like USA, Indonesia, Thailand, Mexico, Vietnam, Philippines, Malaysia, Algeria, UK, UAE, Saudi Arabia, Africa, European and Middle East Countries. Just contact us or put your requirement in our Enquiry Form, will get back to you quickly.

To download product catalogue, kindly fill the below form